Uta visiting me has been a stimulus to get some work done!  She's on the road right now in North Carolina visiting other friends, but she's going to be back here for two days before catching her plane back to Munich.  So I have had two weeks in which to make the "integration" quilt that I've been putting off for months, in time for Uta to take it back to Europe with her.

I was going through old boxes of stuff and found a bag of fabric that I had bought years ago during a workshop at the Crow Barn.  I liked the four batik patterns in green and brown, especially the one with stripes, because I was just starting to work extensively with stripes.  (Since then I've made at least a dozen quilts from stripes and bought four drawers worth of striped fabrics!)

I did a day's worth of piecing at the Barn before I decided that I didn't really like what was happening, and packed everything up.  Years passed.

When I came upon the bag last week I decided it wasn't so bad after all, and if I were to sew up the parts I had already begun it would fit the IT theme of "integration," because the green and brown fabrics started separate at top and bottom of the quilt and together in the center.

I feel good about this quilt.  It isn't beautiful, but that has never been a problem with me.  I like the graphic quality of the color contrast, and the pale green reminds me of the very first leaves of springtime.  That made me feel cool and refreshed in the midst of a hot and humid August week. 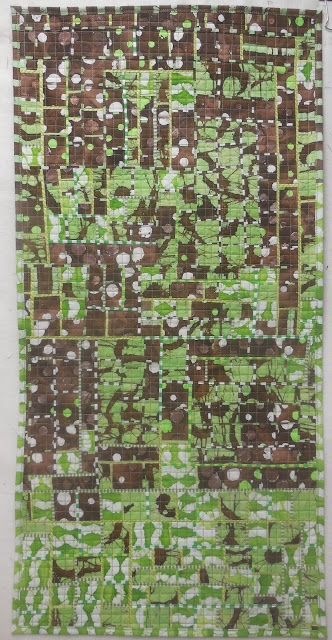 
I finished the hand-stitching quilt some time ago but never got around to putting a sleeve on the back or posting a photo to the blog.

It started as an exercise in hand stitching from the wrong side of the fabric -- I find that when you can't tell exactly what you're doing, it gives a great air of spontaneity and surprise.  When I realized that I could use this piece as the center of my International Threads quilt, I decided this would be an experiment to see how I liked putting machine stitching (the quilting) on top of hand stitching, which I had never done before.

I added black fabric around the edges of the stitched piece to make it the right size for IT, quilted it, and then added a lot more hand stitching over the top.  Some of the additional stitching was to partially cover the machine quilting, so those lines didn't stand out quite so strongly.  Some was just because I find it hard to stop stitching once I get started!

Now that Uta is here in the U.S. I quickly finished the sleeve so she can take the quilt back to Europe with  her next week. 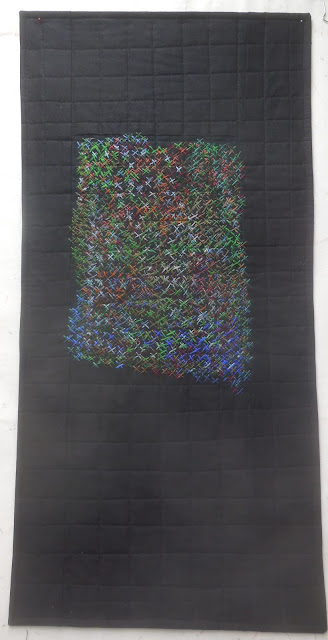 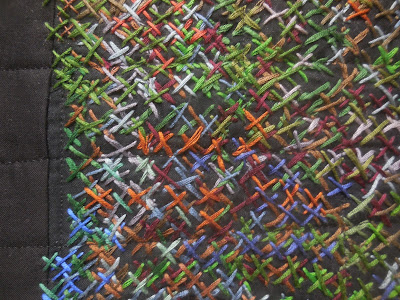 
Uta has been visiting the United States this month, and spent a week with us in Louisville before heading off for several other stops, including watching the eclipse.  We had a great reunion and she got to meet several members of my family that she hadn't met before, including Vivian, who will be four months old next week. 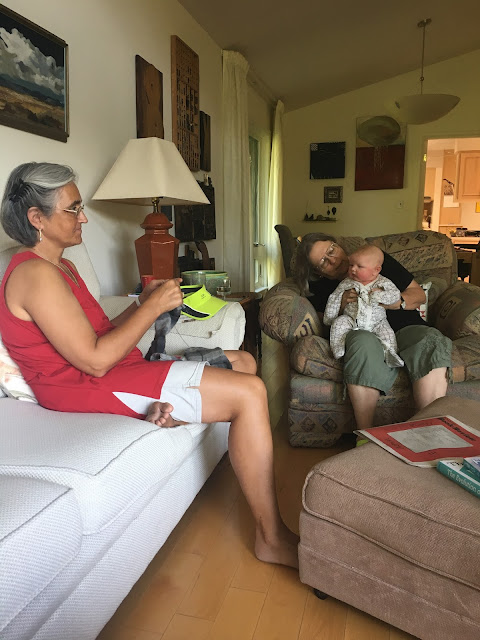 I know I am way over due announcing my theme for the next challenge. Life seems to be getting in the way lately. And that is also the inspiration for my theme:


Lately, I have started to sew by hand - simply because I spend so much time sitting at the computer that I do not really enjoy sitting at the sewing machine as much as I used to. In my small world, hand sewing offers a greater potential to relax and take it easy, and it gives me a greater freedom to piece complicated patterns. That is why I would love to see your interpretation of the theme. Now before you groan or kill me: it does not have to be completely hand stitched. I'll be perfectly happy to settle with ONE visible had stitch on the piece, if that is what you are going for.

Barbara
Posted by Barbara L at 21:08 No comments:

Friday evening we had the opening of our exhibition in Munich. A select crowd of interested people came, and we were very happy to get a chance to talk to most of them.


Everybody agreed that it is indeed a very nice exhibition. We are showing 58 quilts in total. In one section, a small retrospective of Ita's work is assembled together, with a few more of her quilts throughout the gallery as well. 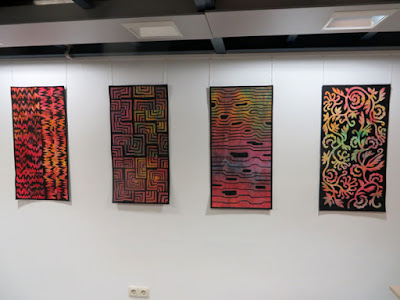 Here is a walk through the entire gallery, starting upstairs, in the section that features the challenge "Blue".

Email ThisBlogThis!Share to TwitterShare to FacebookShare to Pinterest
Labels: exhibition

Hanging the exhibition in Munich

Barbara Lange and I met on the train and had a busy afternoon putting up the exhibition in Munich, at Quilt et Textilkunst Gallery, Sebastiansplatz.
Public transport makes a lot of things possible - this time the exhibition was pushed around on a wheelbarrow, in two sturdy boxes. 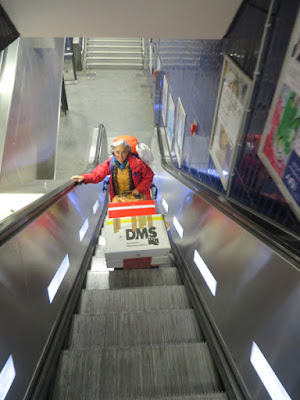 Good to know where the escalators go up when you're coming from the subway station!
We had to change all the hanging arrangements, and worked hard. 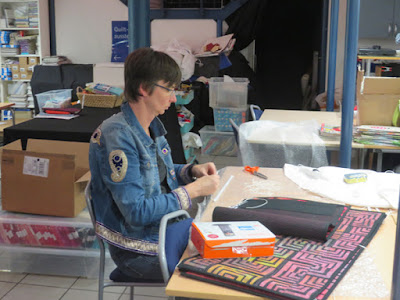 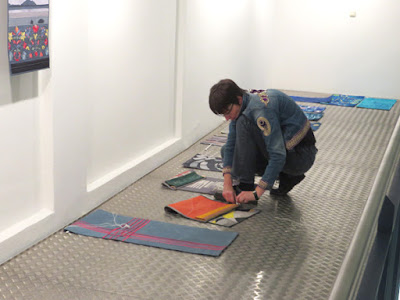 And yes, you may very well wonder how we managed to get these four up there. Sorry, now photo of that process, because both of us were seriously involved... 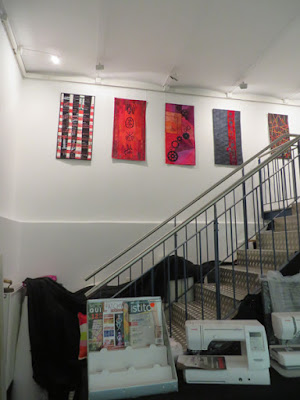 A few first impressions, but the real thing will only be seen tomorrow, when we have the opening. 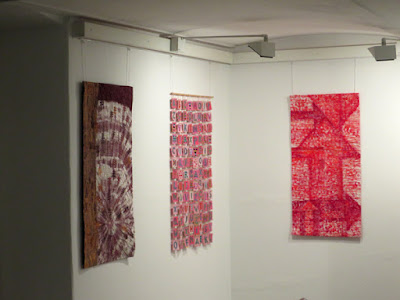 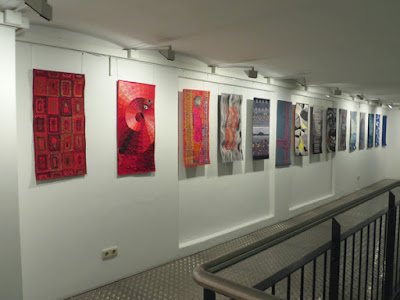 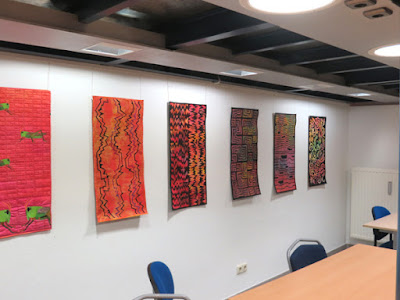 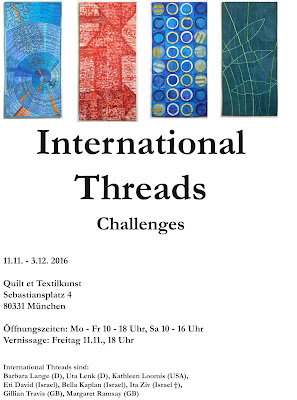 Everybody is welcome!
Posted by Uta Lenk at 02:00 No comments:

Email ThisBlogThis!Share to TwitterShare to FacebookShare to Pinterest
Labels: exhibition

Just in time for the exhibition in Munich I managed to finish my quilt for the challenge "Signs and Symbols".

It is based on the traffic light symbols going back to times when there was still an East German little man on them that looked much happier and more springy than the stiff and boring West German one. Sometime after the wall came down, a little Girl appeared, too - I admit, I have not gone into the history of the development of this little sign.
Photos can be found on the internet. 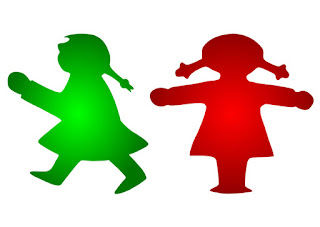 Save, print, trace. Somehow I ended up using only the one where she is walking. But wanted to keep the green/red opposition anyway. Transfer to wonderunder, get ready to fuse. 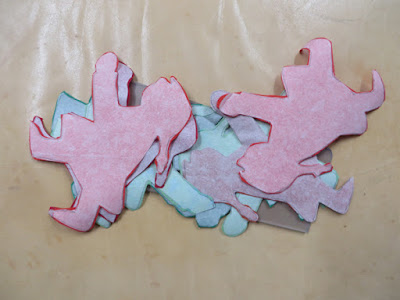 I chose a gray background, in 9 patch, and sprinkled the ladies onto that. 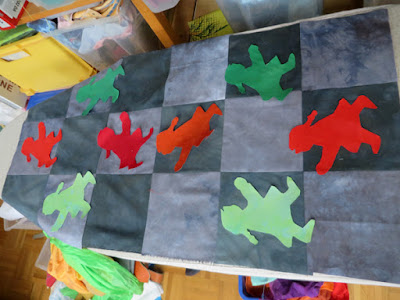 Like this, or perhaps just a little bit different? In the end, the girls in the lower part were moved around a bit. The title is Chrisse Seager's suggestion.


First to be seen in Munich, starting tomorrow.
Posted by Uta Lenk at 20:11 No comments:


I am embarrassed at how far behind I got on IT assignments -- this spring I did very little but sew Quilt National entries.  But I finally finished the autumn colors quilt.

After I finished the Quilt National things, I decided I needed to do some cleaning of the studio and was sorting and consolidating a bunch of samples that I had made in Nancy Crow workshops a long time ago.  I came upon this piece, 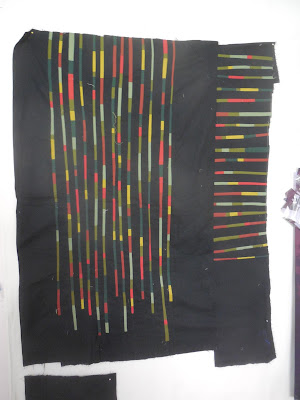 noticed the colors, and decided it might be recycled into an "autumn" quilt.

My first thought was just to take the left-hand part of the composition, trim it to IT size and quilt it, but then decided it needed something more.

There were no leftover bits of the autumn colors fabric in the bag with this piece, but fortunately in my cleanup I had also come upon some yellow, orange and red fabrics that were sitting there waiting to be put away, and I used them for fine lines.  Here's what I came up with: 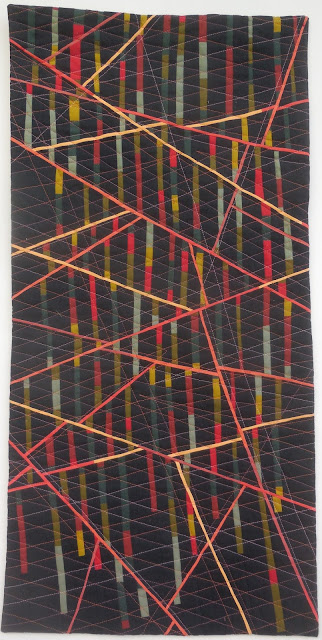 Posted by Kathleen Loomis at 21:17 No comments:


I've had this quilt pretty much finished on the design wall for weeks, trying to decide if it needs some hand stitching in addition to the machine quilting.  I think it does, but lest everybody think I'm a slacker, thought I would post it anyway.

Several months ago I wrote in my blog about a quilt I really liked in a show, and about the pieced "ladders" that were an important design element.  Somebody left a comment that she wished she could figure out how to make pieced ladders, so I did a how-to blog post.  I used some blue and green fabrics that were sitting on my worktable waiting to be put away (I had given them to a quilting pal who needed more greens for a project, and she brought back what she hadn't used).

So having pieced enough ladders for the tutorial, I decided to make more and use them for my Green quilt. 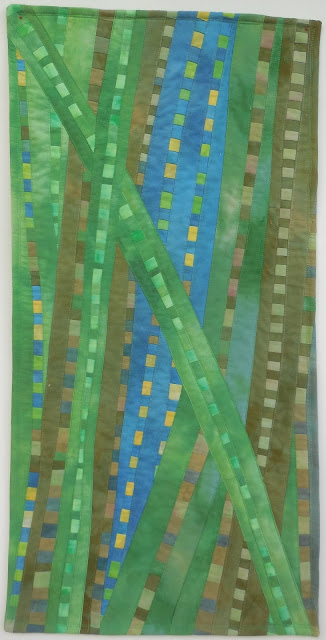 Posted by Kathleen Loomis at 21:06 No comments: 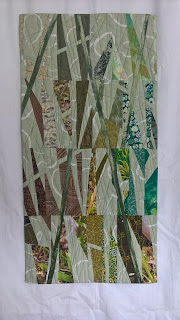 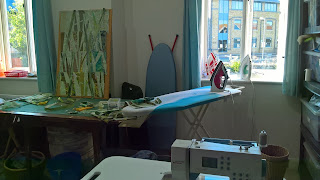 With moving house and then Ian having surgery it's been a long,long time since I’ve done any sewing. But with Ian back at work,and inspired by FoQ (lovely to catch up with Uta and Gillian),I’ve made the first in the backlog and have ideas for others.I'm on a roll! This one is one of a series about losing my wedding and engagement rings while collecting rare fen orchids on Catfield Fen.The reeds are taller than I am! You can read more about this green series here.
Posted by magsramsay at 12:50 No comments:

is a group of eight artists from five countries. We have agreed to use member's suggestions as common inspiration for our work three times a year. And we are looking forward to our first public appearances in Prague in April 2015, and France, 2016.